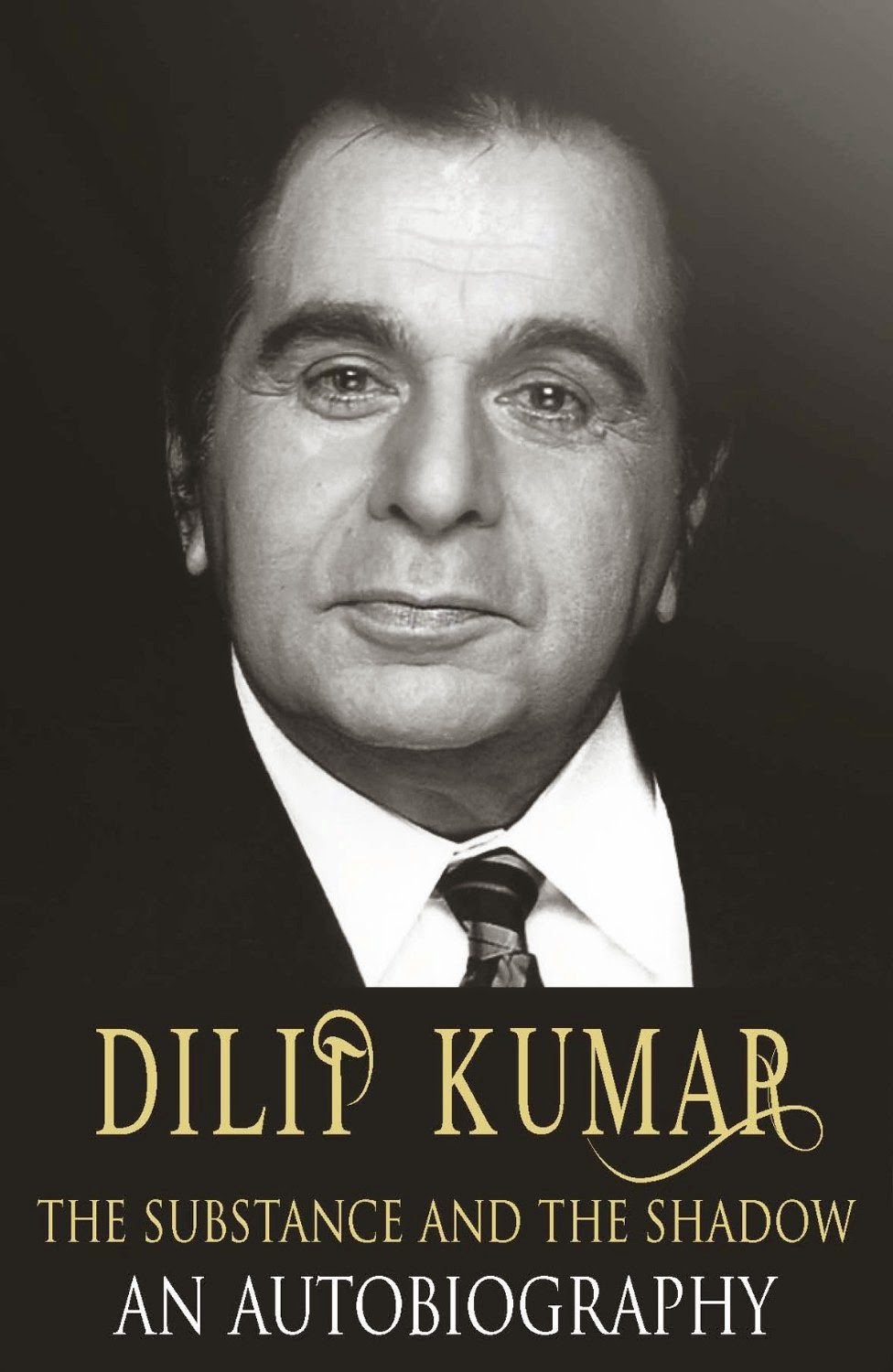 n narrating life’s journey to Udayatara Nayar, Bollywood thespian Dilip Kumar (Muhammad Yusuf Khan as was he named on birth on December 11, 1922) recounts untold facts about his life in this memoir. This autobiography peruses how his stardom and Indian cinema matured simultaneously. The facts were either not revealed yet or the gossip media misinterpreted them in prejudice.

The memoir, Dilip Kumar—The Substance and The Shadow: An Autobiography describes his career as a trendsetter. It brings noteworthy facts about his life and works lucidly. Reminiscences by co-actors, filmmakers, friends and relatives perpetrate his meticulousness and innumerable contribution in cinema. Sections on his filmography, adoring tributes by the film personalities or acquaintances present his indisputable collage of film art. Through firsthand narrations and reminiscences in this book, Udayatara Nayar brings a complete zest of tragedy king’s personality.

Dilip Kumar would always insist the directors pairing him with wife Saira Banu that physical intimacy scenes be avoided onscreen. Such insistence wasn’t to portray his orthodoxy. It was because he believed it a moral responsibility as an actor and head of the family to ensure nobody is embarrassed. They starred together in Gopi (1970), Sagina Mahato (1970) and Bairaag (1976) movies after marriage.

This memoir unfolds an inspiring journey of an actor born to British Indian Peshawar’s fruit trader Ghulam Sarwar Khan and his wife. Even in zenith of success as Dilip Kumar maintained humble lifestyle with distinction of being Bollywood’s first ever superstar being immortalized in his lifetime. He realized essential secrets of filmmaking and choose film medium seriously through assessments without formal training. He grasped nuances of filmmaking and delved into characters performed. His belief was that an actor’s responsibility doesn’t end with acting. Movie’s finesse would be possible with collective effort.

The book unfolds archetypal facts about legendary actor from his work choices not governed through remunerations offered to his early influences. Once Azaad (1955) released he developed confidence in acting with sense of achievement in the early career. He pointedly mentions that halfway through filming Mughl-e-Azam (1960), actress Madhubala and he were not in the talking terms. Famous scene of a feather coming between their lips flared up many sensual imaginations. It was shot at a time both didn’t greet each other. It portrayed film history’s two mature professionals dedicated to careers. Their merits were unquestionable as costars performing scenes with professional commitment. Both fulfilled the sensitive, arresting and sensuous screen moment vision of director by keeping personal differences or egos aside.

Speculations were rife that Dilip Kumar and Madhubala would tie the knot while Mughl-e-Azam was filmed in 1950s. Gossip media prophesied Madhubala’s father Ataullah Khan opposed her marriage with Kumar. On contrary, he couldn’t bow down to her father’s foolish precondition to involve daughter and potential son-in-law in the production company he ran and forcing Kumar to ignore other commitments. Ataullah Khan was elated for possible arrangement of two stars under one roof. Kumar believed to separate personal and professional relationships. As Madhubala didn’t agree to him their relation soured.

Dilip Kumar became successful actor in early 1950s. By then, his father was acquiescent that what he wished for his son was granted. His initial hurt pride was due to son’s choice of becoming an actor instead of an officer which didn’t fruition. Kumar narrates that while he looks back at those years from rising in the profession he feels a sense of satisfaction due to setting his priorities. He has lived up to father’s expectations through taking over family responsibilities as parent-brother and proving that.

Why Dilip Kumar didn’t consider specific movie crucial to his career’s growth? Attaining experiences from them groomed him to rediscover his potentialities. Each movie played pivotal role for him to hone acting skills. This autobiography informs us about leading ladies with whom he worked. His pairing with actress Vyjayanthimala in seven films was remarkable and portrayed great onscreen chemistry. Their reminiscences speak volumes of love, affection and encountering a rare human being in him they met.

Former Indian prime minister Pundit Jawaharlal Nehru personally approached Dilip Kumar to campaign for Congress party in Bombay (now Mumbai) elections. Becoming sheriff of Bombay in 1980 to Rajya Sabha member in 2000 encompassed his political stints. Gesturing to travel by special festive annual train from Bombay to Poona for decades with an aim to meet common masses inspired many for social causes. It promulgates the multifarious aspects of his towering personality.

Kumar’s Peshawar visit in 1988 reignited his nostalgia. It was memorable journey when former Pakistan President General Muhammad Zia-ul-Haq received him with state honors. Moment of reminiscence came when an uncontrolled crowd from his birthplace rushed towards him for a glimpse. It brought melancholic tears in his eyes. He revisited many places in Pakistan including his birthplace Kissa Khwani Bazaar area.

He visited Pakistan again in March 1998 while its government invited him to accept highest civilian award, Nishan-e-Imtiaz. Government of India bestowed him Dadasaheb Phalke Award in 1994 and 3rd highest civilian award, Padma Bhushan in 1991. He maintained distinction of being first recipient of Filmfare Best Actor Award (1954) and so does he hold record for maximum number of Filmfare awards won in a specific category with 8 wins. He was awarded Filmfare Lifetime Achievement Award in 1993.
This memoir portrays Kumar’s childhood pranks, unconditional love from grandmother to mother and father’s subtle but virtuous affection. His closeness with filmmaker family Prithviraj Kapoor and his son Raj Kapoor from Peshawar to Bombay is sincerely described. Dilip Kumar and Raj Kapoor maintained a deep friendship since college days. Gossip media reported their professional rivalries but in reality their friendship became deeper bonds from trust to respect for each other.

He sensed family responsibility since childhood, rebelled and went Poona for work at one point to start his sandwich shop. It was lucrative business but he realized his absence created vacuum in family and perhaps he was not meant for such works. While assisting father’s business in Bombay after his small Poona interlude, he explored other business opportunities. Once waiting for a local train in Bombay he incidentally met Dr. Masani whom he knew from early interactions. He was taken to Bombay Talkies thereafter. Life changed drastically when an acting job was offered to him for a monthly salary of Indian Rupees 1250 then. He met early mentor actor Ashok Kumar at Bombay Talkies.

His first acting break came with Jwar Bhata (1944) but he was unnoticed until Jugnu (1947) released. Subsequent movies Shaheed (1948) and Andaz (1949) brought more popularity. Bollywood fraternity metaphors him Tragedy King but his acting career of over six decades are of finest movies of multiple genre including romantic Andaz (1949); rumbustious Aan (1952); dramatic Devdas (1955); comic Azaad (1955), historic Mughal-e-Azam (1960) and social Ganga Jamuna (1961) as versatile film works.
This memoir recounts 11 October 1966 exclusively when Dilip Kumar and Saira Banu married. From nikah (Muslim marriage) to walima (marriage banquet) to friends & relatives’ blessings to huge media attention are all narrated engrossedly as if events happened before the readers. Newspaper headlines wrote about ‘most eligible bachelor to become groom.’ It was big surprise due to presumptions that he won’t be able to adjust with a girl twenty-two years younger than him. Their natures differed but they understood each other well. Such understanding still remains the success mantra of their marital life. This book projects an ideal family relation and wishes received from friends in films and non-film fraternity.

Kumar’s friendship with co-actors and family is summed elaborately in this memoir. His passionate love for wife Saira Banu is portrayed through an incident when she was admitted in a London hospital. Entire hospital staff observed the keenness of wife-husband relationship of absolute care surprisingly. Their pranks played with each other brought fun moments in life and also inspired for his comedy acts in finest movies later. Welcomed by colleagues in Madras (now Chennai) was the adoring gesture for them.

Singers Mohammed Rafi, Talat Mahmood, Mukesh and Kishore Kumar sang for Dilip Kumar in his entire film career. This memoir meticulously defines several unknown facts related to his life and works. They turn it a seminal book to develop keen interest in the readers.

This review was first published in www.ceylontoday.lk on January 25, 2015
Posted by Unknown at 10:54 PM