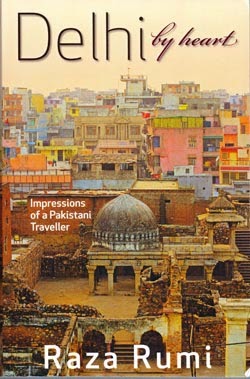 Impressions are first-hand observations which inspire opinions for good or bad imprints. Raza portrays them on Delhi from culture to sense of belongingness in his company of commoners, celebrated inhabitants, academicians, bureaucrats and of course friends whom he meets succinctly and in the rendezvous whenever visited the city as an explorer for the subject of this book.

Resident of historic city of Lahore, Raza finds in Delhi similar cultural assimilation – a traditional ingenuity – Delhi of today offers that home feeling. This book expresses many such facets of Delhi from history of constant settling and unsettling to enriched research on Sufism. Erstwhile Mughal rules, ecstatic cultures and literary contributions of scholars from Mughal regime till date have been summed up meticulously. Deep rooted research on such issues transforms it into historical realm instead of traveller’s impression.

“The legendary twenty-two Sufis sleeping its urban mass turned the city and its environs into an unmatched place of reverence. Termed as ‘Little Mecca’ by medieval and colonial tazkiras of the subcontinent, Delhi’s primacy as the Sufi capital was unchallenged except by Ajmer, cited as ‘Little Medina’ by the biographers of Khwaja Moinuddin Chisti,” (Delhi by Heart – Impressions of a Pakistani Traveller).

Consistent description of Sufism professes unique Delhi unlike its modern identity of a city serving as capital of biggest democracy in the world which new generations see. One on ones’ of this author with literati and common men are narrated as much as history gets described through the descriptions to impressions of a foreigner. Historic explanations showcase merit of a foreign author “knowing too much about a city in another country”.

Reading this book creates nostalgia that even residents feel they were not aware of many facets of Delhi – a modern city. It sums up chronological description of Sufism in Indian subcontinent and is indeed a reference on Sufism instead of a travelogue which one opines in the first impression for that purpose.

History describes rulers of Delhi spanning to several centuries to the gory end of United India Kingship under the Mughals to British colonisation of undivided India. This book presents it lucidly. Grandeur and degeneration of Mughals are articulately defined as a historical narration instead of traveller’s histrionics. Well-researched book narrates sheer hypocrisies, demeaned identities, cultural destructions and bloodbaths in the Indian subcontinent which literally changed its course through liquidating towering civilizations.

Its narration has wealth of impartial commentary on Indian literary circle whom Raza met and converse with during his India visits. He does justice in explaining assessments on Delhi’s arts, religious harmony from past to present and architectural historiography of an ancient city. Justice is also done through propagating sense of brotherhood in Delhi that according to many is a remarkable place on earth. This book vividly explains undivided India invasions and repeated lootings which tarnished solemnity of Delhi’s civilizations.

Raza espouses arrival of a new culture which inculcates in Delhi and remains a guiding force for the new generation. He observes that during impromptu meetings with youngsters in this city especially during eating-outs or simple chats he could understand the inherent development of Delhi. His interactions with academia in the city’s prominent universities, Jawaharlal Nehru University (JNU) and Jamia Millia Islamia (JMI), are deep expressions of kinship – a matured outlook of a new generation Pakistani thinker. His demeanours are beyond boundaries and observations don’t carry any prank.

“I wonder about the signages on modern boards – Kidwai Nagar, Hazrat Nizamuddin, Jain Mandir, Okhla, Jamia, Saket, etc. Delhi is a multi-petalled lotus like the Bahai’ Temple and should be nurtured. This city belongs to all South Asians; those who are in a perpetual state of self-hatred may leave it alone.” (Delhi by Heart – Impressions of a Pakistani Traveller)

Vivid description of genocides, bloodbaths and pogroms aside, prudent impressions of a frequent Delhi traveller advocate fulfilling of dreams by new generation who have a cohesive future. Its replica is seen in Delhi in its diversity.

This post-partition born Pakistani traveller doesn’t see in this city any sense of “your Hindu India and our Muslim Pakistan.” This book is a welcome addition to the wide range of literature on Delhi. It has new perspectives in Delhi’s civilization as nurtured from the golden history.