he whole world is murmuring the gushy anecdotes of the war against terrorism; the ‘holy war’ perpetrated by US President George W Bush. Only a few dare to admit the fact that Bush is not the only crusader in this type of holy war. Salahuddin Pervez 1 is one bigwig of literature who has dared to unleash the horrors of holy war and its unholy and messy outcome in his recent novel The War Journals. As the name suggests, The War Journals is not only a documentation of war but also a hypothesis for the world’s major wars. Salahuddin Pervez radiates deep emotional appeal in his narrative style and uses elements unparalleled in modern Urdu literature-- prose and poetry summed up in one novel. Such literary revolution was rare in early Urdu literature. 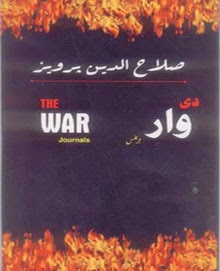 The novel unconsciously reminds us of the use of symbolism applied so well by the legendary American novelist Earnest Hemingway. The War Journals (Urdu) and Farewell to Arms (English) are similar and yet dissimilar. Hemingway and Salahuddin Pervez know the outcome of war for ‘sustainable peace and prosperity’, wars where the goal has never been achieved. Both the writers weep in solitude while examining the predicaments of war. Both have the flair to be outspoken but also know how to placate and use symbolism. The major difference between these two books is in defining the nature of war. It is undeniable that Farewell to Arms imprints the social and psychological dimensions of the world war and is testimony to Hemingway’s crispy personification of English literature.

In contrast to Hemmingway, Salahuddin Pervez releases us from the norms of Urdu literature. War cannot placate peace. The War Journals denigrates the pogroms that humanity has faced from its inception until now, and might be facing it in future. The novel is not specific to any country, creed, and caste or period. According to Pervez, war is a plague on society and the aftermath of war renders humanity to drifting dust. An extract from The War Journals supports this fact through these lines of direct conversation:

(Sir, Sir, I am alive sir. We have come here to clear the debris and not to lift you. But sir, I am still alive! Why? We cannot lift you! Why Sir? Because you are a human being!

These lines from the novel distinguish The War Journals from others and capture the attention of the world. The epic war Mahabharat2 is lucidly described in the novel, but one cannot claim that the book has been written in the context of an Indian scenario. The novel neither exonerates nor pacifies the kingpins of war. Certainly, some questions lie unanswered, and the reader must acknowledge that the novel is incomplete.

Salahuddin Pervez, as a novelist, has introduced a new trend in Urdu novels. This trend has become the cause of divergence in sections of the Urdu world and has created an outcry in literary circles. Pervez has broken many existing rules of literature to introduce a narrative style, which is modern as well as hypnotic. The writer uses his style of mixing Urdu, Hindi and English words i.e. Hindustani, to keep up a fast pace, perhaps too fast for readers trying to understand the philosophy of the novelist. Proper use of metaphors and similes (Earlier confined to poetry only) and mixing cultural identities has always found a place in his writings and the trend continues in The War Journals.

The holy war that has been perpetrated by Bush has turned both Afghanistan and Iraq into rubble. The War Journals elaborates on the completely unholy stain of this holy war that will ultimately shame humanity. The book captivates us with two other holy wars fought for the cause of religion, fascinating insights to the Mahabharat war and the Karbala war-- that was the holy war between Imam Husayn, grandson of Prophet Muhammad (peace and blessings be upon him) and Yazid at Karbala. Surprisingly, the novelist has attempted to draw a parallel line between the holy wars along with the war for genocide by Bush and Blair in The War Journals, which is quite heartening and shocking!

But the novel is worth reading, not only as a novel but also to help us understand the fact that ‘truth and humanity’ should be our ultimate Values. Unfortunately, nobody seems prepared to follow this path yet. Perhaps one day we will all realize that war is no solution for peace to prevail.

2- Mahabharat is the longest poem in the world, made up of 220,000 lines divided into 18 sections. It was written in Sanskrit, the ancient sacred language of India and it tells the story of a great battle that occurred about 3000 years back.

Asif Anwar Alig is associated with ETV networks. With a postgraduate degree in journalism and mass communication from Aligarh Muslim University, Aligarh, he has been writing for newspapers since 1999 and working in the field of electronic media for the last three years.