Reviewed by Asif Anwar Alig
he leaflets of history explain the gory invasion of British on the suppressed countries for centuries. British colonized those nations to rule them in seer hypocrisy, grabbed their enriched wealth, demeaned their identities and destructed their cultures. The acumination was performed with decrepit intention that followed by bloodbaths.

How India, the hub of towering civilization, would have been spared by the British. India had enough wealth which British could loot. Mughals here had a great history of ruling, art, religious harmony and architectural historiography.

The kings developed the sense of brotherhood amongst its subjects. Similarly hundreds of Hindu Kings too played pivotal role in their own provinces to make this country a heaven on the earth.

British eyed upon India and after repeated attempts of luring and deceiving Mughal kings they took control of Indian Territory to fruition their modus operandi that tarnished the solemnity of its civilization. Their methodology to rule the country was intrinsic: weaken its kings through “lavish negotiations”, trap the defective and opportunist officers of each kingdom through favouritism and have control over them. The opportunist kings who turned into the puppets of the British authorities would sooner got sidelined.

The mutiny of 1857 began at Meerut near Delhi. It is considered as the first war of independence. There would have been no need of such mutinies that ended into genocide, bloodbath and pogrom, if the Mughal kings would have applied prudence by rejecting the British intruders at the first instance itself. The first war (mutiny) of independence in 1857 was an abortive attempt to pull an old horse for winning an uncertain race.

Bahadur Shah Zafar, the beleaguered Mughal king, as a patron of the revolt, had already foreseen the consequences. He knew that he had to bear the burnt of the blunders of his forefathers. The consequences were seen sooner when Zafar paid the price for the mistakes of his forefathers. He got arrested and his sons were murdered in the broad daylight. His entire generation was assassinated in a planned regicide.

India is mourning for its 150 year old gloom. The shivering memories of anger that evolved in the form of a mutiny in 1857 remind us the sacrifices of our heroes who sowed the seeds of unity in diversity. The heroes initiated a renaissance with their blood to encourage the coming generations to carry forward their battle as a legacy. The country could never have seen its independence in 1947 if the mutiny had not happened in 1857. Though thousands of revolutionaries amongst many and the innocent masses were brutally killed and hanged by the British, the revolution united the entire country for a single cause — freedom.

A major reason of India’s disparity before 1857 was due to the emergence of “territorial kingship” culture. The country had abundant number of petite kings who didn’t foresee future. They remained dispersed because they had to rule their “small size kingdoms”.

But the revolt in 1857 broke several myths. The rebels of 1857 had a pious intention to free the country from the colonial rule. The revolt united those kingdoms, washed off wounded religious and social plagues that had rooted amongst the masses in the disperse atmosphere.

Revolt of 1857 began with angst: Hindu and Muslim armies serving the British army had to comply with using the arms greased with cow and pig fats. Both the communities were incarcerated with their religious sentiments.

The hypocrisy restrained both Hindus and Muslims to part away and never ever unite. But surprisingly the revolt of 1857 united the countrymen without any reservation of religion or caste.

ndia had dreamt of a future of an integrated nation in 1857 that turned into reality after nine decades of uninterrupted resistance against the British. But this diversity once again got jolted on August 15, 1947 when though the British bowed down before the freedom fighters and handed over the reins of the nation to its inhabitants, it divided the country into two — a Hindu India and a Muslim Pakistan — shattering the dreams of the war heroes of 1857 through religious provocation that worked in the favour of British. 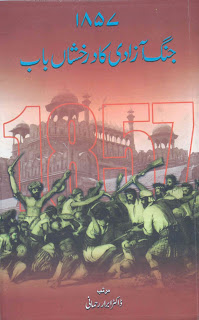 The book under review explains each and every component of the first war of independence in a very comprehensive manner. Divided into two broad sections, the first section of the book is a collection of fourteen research based articles that urges the readers to go deep into the landscape of 1857. These articles are of unique connotation. Compiled and edited by eminent journalist Abrar Rahmani, the selected articles of the book define the varied aspects of the 1857 mutiny.

The pages of the history are reopened in a very articulate manner that leaves enough scope to raise some unanswered questions. What was the role of Delhi in the first war for freedom? Why 1857? The sacrifices of Mughal king Bahadur Shah Zafar, sordid end of the Mughal kingdom, role of Ulemas in 1857, Delhi Court Administration in 1857, bravery of General Bakht Khan, mutinies in Lucknow , Nagpur, Mewat and Allahabad and the attack on the residency in Hyderabad are the prominent issues that nourish the pages of this book scholastically. Each issue is tackled minutely with the historical references. These articles are balanced and adequate to understand the mutiny. An important chapter of this section has a firsthand narration of the battleground of 1857.

Two major articles of this section are highly labyrinthine. Why renowned poet Mirza Asadullah Khan Ghalib, who happened to be an important literary organ in the Bahadur Shah Zafar’s court, changed his hues to fulfill his own desires? Ghalib preferred to stand before the British.

The article justifies its reason and necessity. The poet had seen the gory scenes in Delhi. He was a renowned poet of his time and unbendingly he was an “ordinary” royal poet. The article defies every suspicion raised against him.

Other major issue that has got space in the book is the reasons of loyalty to British that Sir Syed Ahmad Khan had have. He had felt and encountered the reasons of the mutiny that he wrote in his book Asbab-e-Baghawat-e-Hind (Reasons of the Indian Revolt).

Still he remained loyal to the British because he had seen the pathetic condition of Muslims. His role in spreading modern education amongst the Muslim community through favouring British and letting them understand the causes of the revolt and his repeated insistences to have an amicable solution of the crisis is explained vividly in this chapter.

The scholastic collection of articles covers each aspect of the 1857 revolt. However there is a printing mistake in page numbers 168, 169 where an entire page is reprinted from one to another. Overall this book is highly readable and urges one to look into the past one and half century ago and acknowledge the sacrifices of great heroes that turned the mindset of India for once and forever.