And then One Day: A Memoir, by Naseeruddin Shah, Hamish Hamilton, an imprint of Penguin Books, Gurgaon, Year2014, 316pp, Indian Rupeese699, Hard. 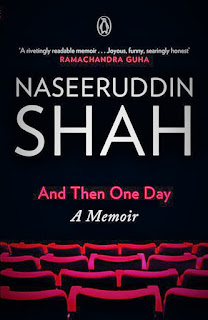 
Perceptions on Shah change by learning unknown stimulating facts about him. Prototypical revelations since birth in a middle-class Muslim family to receiving ceaseless support from mother to derisive relation with father until latter’s death remains melodramatic. Perturbed connection with father and his struggles for a career in acting are all robust ideas explained.

Assessing personal life, formative years to Shah’s disconcerted relationships are vivid in the book. He considered his father a primary hurdle in his aspiration to become actor. Without reconciling his career ambitions his father insisted him to choose ‘proper job’ like rest parents dreamt in post-independent India. His ambition for acting was considered absurd idea and he finally rebelled to fulfill that earnest dream. He asserts that his father though always provided him financial support but kept summoning him to become mannered. It was while sitting beside father’s grave that he found first opportunity to speak to him uninterruptedly without being rebuked, Shah narrates in melancholy.
Discussing about several known and unknown peoples in the hilarious narration, Shah turns this book mature storytelling chronicler. His contemptuousness against big budget filmmakers without underestimating small budgeted moviemakers to respect of commitments brought recognition of emergence of a consummate actor.

Complexities in family relations, struggles as an actor to bad academics in school and college kept haunting Shah. His acting abilities were though nourished while he was graduating from Aligarh Muslim University (AMU) where he had good exposure in drama and stage art.

Nineteen year Shah married to 34-year old Purveen during stay in AMU. Birth of their daughter Heeba made him an irresponsible father while he was not ready for parenthood. Upon separation, Purveen migrated to Iran. Decades later his daughter communicated him in Persian. She met him to join his rest children from current wife Ratna Pathak whom he married in due course of time. Such are melting pots of life’s confessions by a versatile actor.

It could be thoughtless to explain the absurdities of life in a memoir but such volatilities of Shah’s life honed his instincts. Suppressive behaviours by many at home, in school, colleges and in society he lived rather empowered him to overcome all complexes.

Drama still remains a passion for Shah although he is now celebrated Bollywood actor. His life as student of National School of Drama (NSD) to association with the fellow students especially friendship and severing relation with one Jaspal in unfavorable circumstances are opaque details. NSD groomed him in acting and gave opportunity to meet friend and fellow actor Om Puri and many others. The then Director and theatre icon Ebrahim Alkazi was his mentor and skillful teacher. 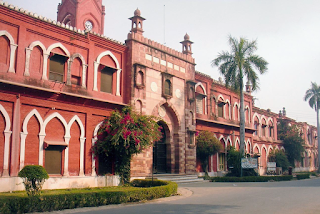 This memoir mentions Shah’s struggles from witnessing the worse phases in Film and Television Institute of India, Pune to known and unknown persons as pulsating characters in his life. They are cursorily described except his mother about whom he writes with great affection. Undaunted praise of Om Puri who stood before him on each and every occasion as a friend and fellow actor to aggressively narrating about growing decades of Indian theater & drama and the making of Bollywood’s finest films are worthwhile recounts. 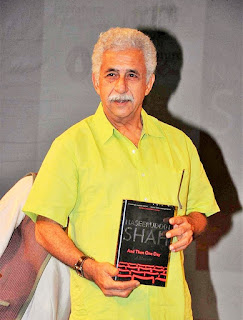 While explaining good and bad cinema Shah also talks of his contextual appearances in theater and accepting admirations and brickbats. Appreciations for fellow actors, mentors to people close to his life are adulating facts. Highlighting Geoffrey Kendal’s incessant efforts to nourish Shakespearana in India to inculcate theater culture in the subcontinent are worthy narrations. He admired Kendal since school days as idol and their meeting during the shooting of acclaimed movie Junoon by celebrated director Shyam Benegal proved nostalgic. He had his organized debut in Bollywood in 1975 with the movie Nishant by Benegal.

Having keen eye for acting and drama since school days at Nainital to honing the talent in AMU he hardly exceled in academics anywhere. His father had enrolled him in AMU against his will ‘to mend ways and to find a goal in life’ but he rather chose the ‘right path—acting.’

Difficult days of Shah in Bombay (now Mumbai) in first attempt to try luck in acting and on later years are interesting details. Getting tracked by legendary actor Dilip Kumar’s eldest sister, Sakina during his first runaway bid to her giving him refuge and sending back to home on the insistence of his father are dramatic explanations. Seeing priceless books on films and filmmaking to Filmfare trophies lined on the shelf at Kumar’s house developed zeal in him. He would usually pick a few to imitate acceptance message in fascination there. 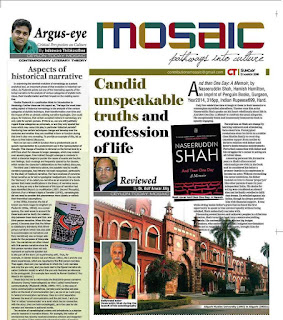 Shah had struggling days in Bombay until making a respectable place for himself as film and theater actor. While this memoir concludes he talks of his marriage to stage enthusiast Ratna Pathak—who he confesses brought stability in his life. From preface to closing chapter his confessions are honest. Written with ample humor its narration is rude but straightforward.

Vividly explaining the reality behind Bollywood masala to no-so-masala movies he doesn’t hide his indulgences of doping; smoking; bad acting and women in life. Equally does he mention professional relationship with actress Shabana Azmi and et al and writes what he actually thought of as poignant and heartbreaking moments of life. Without being melodrama this book doesn’t shower praises on his sacting abilities. Sticking to his characters to giving due credit to those having some impact in his life seems no exaggerated. The book is a vivacious portrayal of upper-class India of half a century ago. It describes generation gaps and changing trends in Indian societies.

Shah mentions his struggles as an actor and reveals them shamelessly in confessions why he had to work in many films for survival. Remarkable lines by eminent historian Ramachandra Guha advocates it on cover page—‘A rivetingly readable memoir……Joyous, funny, searingly honest.’ Actor, film director, writer and playwright Girish Raghunath Karnad considers this book—‘a moving account of Naseeruddin Shah’s struggles to overcome the handicap of being exceptionally gifted, to realize his full potential as actor. Honest, funny, scintillating.’ As a practical recount of life to works of Naseeruddin Shah this memoir is a fabulously appealing work of literature on acting.

With thorough talks on life, relationships and works in theater to films until settling with current wife Ratna Pathak, Shah leaves ample scope for book’s sequel.


[Asif Anwar Alig (asifanwaralig@gmail.com) is assistant professor and media relations specialist at Saudi Ministry of Education. He was earlier an executive producer in ETV; editorial coordinator at MDI, Gurgaon (India) and media specialist at PMU (Saudi Arabia). His website www.asifanwaralig.com advocates—“Books are hard-bound drug with no danger of an overdose and he is a happy victim of books.”]

http://www.ceylontoday.lk/96-120854-news-detail-candid-unspeakable-truths-and-confession-of-life.html
Posted by Unknown at 12:27 AM No comments: