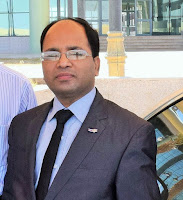 hile intolerance, chauvinism and Hindutva totalitarianism reels India through minority suppressions, especially of Muslims, with series of clampdowns since Narendra Modi led Bhartiya Janata party (BJP) swept the poles should Muslims feel at home in India? At Home in India: The Muslim Saga by Salman Khurshid illustrates a ray of hope. Muslims mustn’t underestimate the prodigious contributions of their forefathers. They indisputably contributed to build India’s cultural, social and economic sanctity, he advocates.
Seasoned politician Salman Khurshid raises questions in a context of Sachar Committee and Mishara Commission reports on social and economic status of minorities especially Muslims. Issues of national interest for them like ‘Reservations to Inclusion based Social Justice in India; Equal Opportunity Commission and Communal Violence Bill of 2011’ have been thoroughly discussed. Sections on Riots & Reactions; Global Islam and India’s Secular Muslims to Leadership for New Century besides Notable Indian Muslims and Muslim Renaissance in India perpetuate why they should feel proud of their past, present and future. 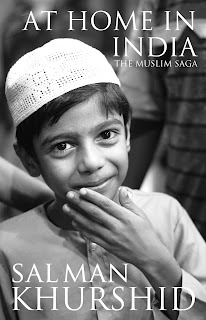 Covering almost everything on Indian Muslims—from concerns to contributions in country’s growth perspective—this book elaborates the role of this community to entrust why they feel at home. A section entitled Education; the Cradle of Capacity Building run over few chapters discuss the niche issues of establishment and contributions of India’s renowned Muslim minority institutions Aligarh Muslim University (AMU) and Jamia Millia Islamia (JMI). Both brought educational renaissance in the community since their inception and still shape destinies. This book overviews AMU and JMI foundation, growth and erratic dawn falls.

India’s partition in 1947 was biggest setback for these institutions while intellectual Muslims shifted to the newly created Pakistan en masse. Former president Dr. Zakir Hussain alongside other Muslim intellectuals initiated JMI nourishment to build and rebuild it. Intellectuals associated with it nourished it to preserve the nationalistic traditions. ‘What else could be best coincidence and slap on chauvinist forces to convey that in the mid-1980s, a Muslim Professor Mujib Rizvi headed JMI’s Hindi Department whilst its Urdu Department boasted due to the untiring efforts of scholar and Hindu Professor Gopi Chand Narang to defy religious divisions.

AMU foundation as Mohammed Anglo Oriental College in 1875 by Sir Syed Ahmed Khan to it becoming a full-fledged university in 1920 and its struggle to retain minority character have been thoroughly discussed. Its minority issue erupts regularly but solution is still bleak due to biasness. This book summarizes chronology of events that brought manifold transformations in AMU. From potential impact on Muslim think tanks to community rights in the light of original motive of establishing the institution in AMU, this book equally raises questions on those dissociating with it for vested interests. 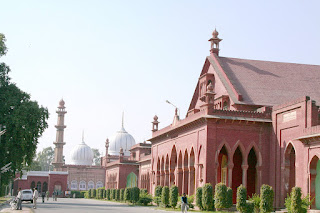 Vision of Sir Syed Ahmed Khan was to form a class of masses amongst Muslims to emerge into ‘Mohammedan in religion, Indian in blood and colour, but English in taste, through opinion and intellect.’ He dreamed to inspire the students to develop self-respect, sense of superiority with regard to social graces by firm belief that one could overcome hurdles with ability to express the intelligent opinions. His vision and philosophy transformed destinies of Indian Muslims with his opposition to a system of education that ‘left inner spirit dead.’

He also believed that education talim (education) and tarbiyat (knowledge and training) were mandatory for budding minds. One prepared for occupations while other designed to bring out innate qualities of character needed for enlightenment. 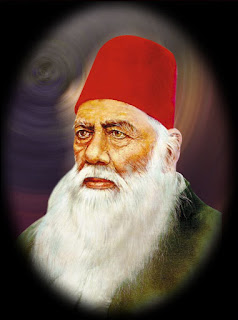 Through discussing general perceptions on Muslim minorities this book asserts that all sections are important to be given equal importance. Muslims though deserved more attention due to specific reasons. Being largest of all minorities with substantial presence they seek respectable life in a country they were born or they chose to stay by choice although separate land was carved out for them on religious grounds.

Their inherent contributions to make Indian history and to shape the ‘Idea of India’ since first resistance against British rule in 1857—First War of Independence—can’t be ruled out. They struggled to dream for democratic and secular nation. Mughal Emperor Bahadur Shah Zafar, prominent leader Maulana Abul Kalam Azad and other towering Muslim leaders dreamed for the modern India. 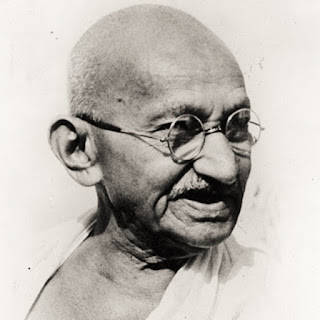 United Progressive Alliance (UPA) government of India led by Indian National Congress set up the committees to uplift minority communities. Sachar Committee focused on Muslim minorities and collected data from all sources in and outside government to observe exact scenario. Raghunath Mishra Commission with wider landscape and focus provided recommendations to empower all minorities.

Pointing out the doom of Indian Muslims ever since country was partitioned, Khurshid exhorts to look on their sufferings in August 1947 riots and thereafter. Repeated genocides from November 1984 riots in the wake of Indira Gandhi’s assassination on 31st October 1984; 1993 Mumbai riots to recent killing in Gujarat 2002 pogrom shook the community. Unpleasant scenarios of riots in Muzaffarnagar and Saharanpur in Uttar Pradesh in 2013 and 2014 respectively further shattered them.

Indian Muslims encounter tough situations regularly but equally do they excel in several professions. They boast of three Muslim Presidents, three Muslim Vice Presidents, four Muslim Chief Justices, one Muslim Chief Election Commissioner, a Muslim Cabinet Secretary and many Muslim Chief Ministers in the post-independent India. List of towering contributions of Indian Muslims is long. This book describes why they are at home in India and questions of ‘Muslims First or Indian First is irrelevant.’ 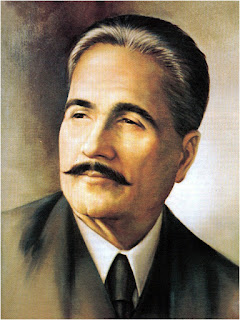 While raising questions that pertain to Indian Muslims, Khurshid insists that he doesn’t propose for them to receive the best of everything sought. In all fairness they must receive what they deserve. They willingly gave up their claims for national integration since country’s partition. They are sensibly compromising on the matters of ban on cow slaughter to rest issues to respect country’s secular fabric. 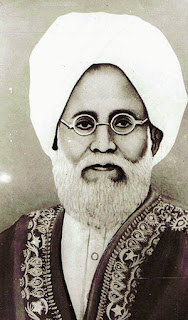 Good chunk of Muslims made bold decision on 15 August 1947 to stay at home in India instead of going into a newly carved out nation—Pakistan. As Indians and Muslims they are Indian Muslims or Muslim Indians. They made a difficult choice through the rejection of powerful claim for them to live together with their own community in a state supposed to be perceived theirs. It was not easy decision for them encountering scenes of divided families, loss of personal properties and shattered lives to bear trauma of a transition. Scares of partition are unhealed yet. As Indian Muslims made clear choice to stay at home they were silent and did not speak traumas or insults encountered. 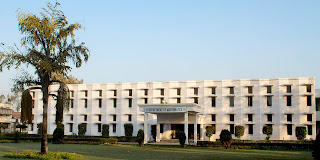 Muslims are usual suspects in India, Khurshid exhorts. An example is how Indian Government was forced to arrange special speech broadcast over the radio by the then Vice President, Dr. Zakir Hussain during 1965 Indo-Pak War with an aim to dispel the wild rumors that he was placed under house arrest due to being Muslim suspect. Similarly, during 1980s matinee idol Dilip Kumar (actual name Yousuf Khan) faced desperate situation to run from pillar to post to protect his reputation against the rancorous intimations of him being a Pakistani spy. Of extreme suspicions were biasness and demarcations to deliberately avoid Muslims in the sensitive posts in government organizations. 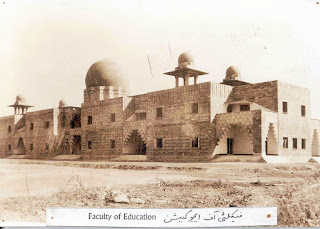 Reflection of Independent India brings grim facts what caused for Muslims to accomplish. They rather faced nagging disappointments by failing to produce serious thinkers after partition, which could be of the caliber of Sir Syed Ahmed Khan, Shibli Naumani or Dr. Mohammad Iqbal except Maulana Abul Kalam Azad—whose ideas were shaped before country’s partition. Perspectives on Muslim Personal Law Board and Indian Muslims in the contexts of Mohammed Ahmed Khan vs. Shah Bano Begum case on the issue of maintenance awarded to divorced Muslim woman under Section 125 of Criminal Procedure Code (CrPC) provide distinct facets of debate in a section spreading over several chapters.
Raising pertinent questions, this book points out why Indian Muslims are subject to gravitational pulls of two extremes. At the crossroads between conservative religious leaders wanting their subservience rigidity under Shariat Law to idealistic left-wing intellectuals looking at the other end without assessing mass sentiments, Muslims, particularly those as midstream liberals, are in catch22situation. Assessment of India’s Uniform Civil Code on multiple perspectives makes this book a seminal work. 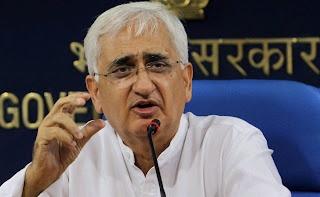 On Islam and its teachings, this book vividly describes idea of a religion—revealed religion to make believers think. Islam was not revealed as a whole at one go. It was rather revealed over certain period of time in response to actual human situations. Focusing on Islamic revolution from the Arab world to spread worldwide, this book mentions life of Prophet of Islam Hazrat Mohammad (May peace be upon him) as portrayal of compelling intellectual, political and socio-economic reform movement. The life prophet became sunnat—a normative path for every believer to follow. Those willing to know respect for women bestowed by Islam must study Prophet’s life instead.

Muslim World didn’t have serious problems for welfare and security of divorced or widowed women during Islam’s expansion. It gave equal status to women some 1400 years ago while other civilizations treated them like chattels. Women were protected through emotional and economic safety with secured entitlements in paternal properties to claims against deceased husbands under the Islamic Law. Male relatives were under an obligation to provide support while all else failed to help desperate womenfolk. 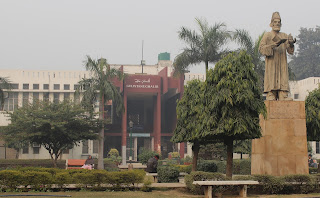 By raising questions in the context of Muslims in India, Khurshid insists that it is usually on only two occasions that legitimate expectations of Muslims come into limelight. Their leaders see a wake-up call once ordinary Muslims are slaughtered in communal riots to shame human civilization or while non-Muslims curiosity evokes questions on Muslim Personal Laws.

Millions of them encounter problems but only few leaders speak fearlessly on their concerns. He laments why it virtually became impossible for them to produce leaders of Maulana Abul Kalam Azad (11 November 1888 – 22 February 1958) and Rafi Ahmed Kidwai’s (18 February 1894 – 24 October 1954) caliber post-independence. 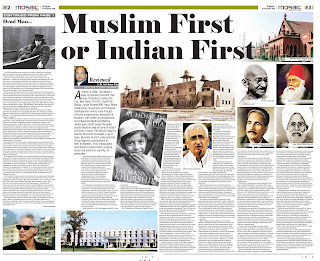 Raising question whether it is still necessary for Indian Muslims to prove credentials of loyalty this book recounts that though Indian Muslims face countless problems it is their home dearest than other places in whole world. Pain and nostalgia of Muslims from Uttar Pradesh and Bihar migrating to Pakistan by yearning for homeland in India even after several decades of migration is vivid. Referred to as muhajirs or tiliars they haven’t found true home in Sindh or Punjab yet in a country they chose.

Besides having an eye on Indian Muslims’ plights this book evaluates their past, present and future. It entrusts Muslims to look at potential scopes to become touchstones. Let them make their own identities in a country they decided to make their home.

This review first appeared in the Mosaic section of Ceylon Today [www.ceylontoday.lk]

http://epaper.ceylontoday.lk/Process/UploadTwo/e_paper/5259.jpg
Posted by Unknown at 1:00 AM