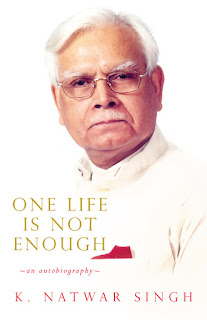 oom is foremost replication of arrogance. K. Natwar Singh begins his autobiography One Life is Not Enough with narrating his loyalties to Nehru—Gandhi family. From an admirer of Pundit Jawaharlal Nehru since childhood to his faithfulness to Indira Gandhi and Rajiv Gandhi until his betrayal to “the family” and bear the brunt of expulsion from the Congress Party, this book incessantly covers transforming discourse of Indian polity.

With documenting conceits, betrayals and confessions, this book narrates autobiographer’s rise and rise until facing the nadir at the peak of his career in politics. From Pundit Jawaharlal Nehru’s era to the current stage it is a treatise on Indian polity. More of history and less of histrionics, it recaps his achievements from being selected one educated in reputed institutions to longest diplomatic career and political forays due to loyalty to the first family until his impromptu perfidy.

Narrating the confrontations and confessions K. Natwar Singh doesn’t regret his betrayal. He audaciously justifies his leanings towards Bharatiya Janata Party (BJP) in book’s conclusion. Besides postulating confessions after expulsion from Congress Party he talks of diplomatic postings to other ‘regrets of life’ which turned him notorious in country’s power corridors.

This potentially engaging book digresses to speak the convoluted realities on Indian polity. Encompassing from Nehru until recent past, it is finest work of history from one of the former diplomats loyal to a powerful family and a politician who still believes that his seclusion is a situational irony. This book credulously projects that political diaspora by summing country’s policies on national and foreign affairs which changed multiple contexts and consequences.

The memoire has cursory information about Singh’s his birthplace in erstwhile princely state of Bharatpur where he was born on 16 May, 1931. That was a period for this region’s struggle to turn into a city in Rajasthan. Admiring Indian freedom fighters, he found it a breakthrough to walk to the Red Fort in Delhi on the eve of 15 August 1948 to hear Jawaharlal Nehru addressing the nation. He expresses euphoria of first remarkable achievement of listening to the radio announcer reading out names of successful IAS & IFS candidates including his—a first from Rajasthan to crack that.

His meeting with Pundit Jawaharlal Nehru in 14 April 1953 was a moral boosting experience for him. Nehru’s gesture to see him off at the door was extraordinary. That influencing gesture showcased good mannerism and magnanimous grace of a statesman of global stature.

K. Natwar Singh considered his friendship with writer EM Foster in the Tagore Society at the Cambridge a highly fruitful one. Foster was cult figure at the King’s College where his place had transformed into a literary pilgrimage center for the youngsters including several Indians. He could perhaps not meet eminent writers Ahmed Ali, R.K Narayan, Raja Rao, Narayana Menon, Mulk Raj Anand and Santha Rama Rau without befriending Foster. Towering contributions of all those writers are of paramount value today.

He found Nirad Chaudhuri voluble but believed that none could match the celebrated writer in India because of his unique idiosyncrasies. His erudition and scholarship was unequal and he remained a walking-talking encyclopedia indeed. His Autobiography of an Unknown Indian is still an ultimate work by an Indian in the 20th century. Though that book earned him global fame he lived miserable life until Oxford University bestowed him honorary degree in later years. Oxford University became his home till death in 1999 at age hundred and one. 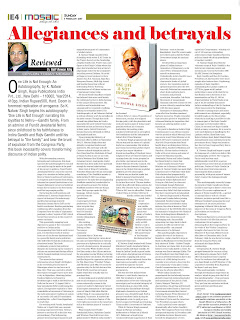 State visit of King of Cambodia, Norodom Sihanouk with an entourage consisting of five Buddhist monks to India in March 1955 was unique experience. To make the accompanying Buddhist monks feel comfortable he was advised to prepare five Indian Buddhist monks to welcome King’s team. Both groups spoke Pali language. Indian monks queried from the Cambodian counterparts for food preferences. To their utter surprise they insisted on eating beef. He literally witnessed Indian monks collapsing in retribution.

His working closely with Mao Zedong, Mao Tse-tung or commonly Chairman Mao’s China was momentous. Sharing about his stays at United Nations to African journeys as a diplomat he is critically vocal of colonial powers. He assessed that even petty White traders would live like royals in the African nations. He was aghast seeing Whites torturing Blacks in their own homes. British justified hypocrite oppression policies for Fiji, Mauritius, Trinidad & Tobago and Rhodesia until 1962. He raises question why British lectured the Third World countries on human rights while they actually practiced that.

A knowledge pool on global politics and social resurgences, this book covers noteworthy scenes in the context of author’s diplomatic career. It has expert assessment of biggest event of March 1968 while Martin Luther King Jr. was assassinated at Memphis, Tennessee. It marked the closure of a vivacious chapter of civil rights movement in the American soil as the darkest phase of country’s history.

K. Natwar Singh prognosticates Nehru attained status of a global leader as a peacemaker. His wisdom and vision earned him global respect except three major blunders—disastrous handling of Kashmir issue; misplaced trust of Chinese leaders and turning down the Soviet proposal to give India a permanent seat in the United Nations Security Council. His steps to discuss domestic Kashmir issue in the United Nations on global platform proved catastrophic.

Nehru was an idealist leader but failed to measure hard-headed pragmatism of Mao Tse Tung, Chou En-lai and rest Chinese leaders which thus affected Chines policies for India. Chinese Army occupying Tibet in 1951 was its aftereffect. Nehru visited China in October 1954 but it hardly yielded any fruitful result. Indo-Soviet cooperation was visible since 1920 itself. Lenin was aware of India’s struggle for independence as early as 1923. Nehru’s visit to Soviet Union in 1927 during 10th anniversary of Russian Revolution further accelerated that trust.

She was first Indian Prime Minister to visit South America in 1968. Her avoidance of public condemnation of Soviet violating sovereignty and territorial integrity of Czechoslovakia in June 1968 while conveying her discomfiture through diplomatic channels to put Indian pressure was a breakthrough. Such gesture benefitted India during Bangladesh crisis. In quid pro quo, Soviet supported through ascertaining China couldn’t intervene for Pakistan.

While K. Natwar Singh assumed charge in Warsaw as Indian ambassador to Poland on 25 March 1971, Pakistan’s armed forces commenced brutal suppression of East Pakistan—soon to become Bangladesh. Horrific events made news there and so did Polish government adopt its cautious stance.

He describes an important phase of Indian history—imposition of Emergency on 26 June 1975 to withstand brutal assault on democracy. Undoubtedly, Indira Gandhi was a powerful, dynamic and charismatic leader of global stature. Her reputation took an upward trajectory after 1971 war with Pakistan but remained short-lived euphoria due to economic and political erraticism thereafter. Lok Satta Movement of Jayaprakash Narayan exhorted citizens in 1974 to non-violently transform India with the mass appeal. Emergency’s damaging effects even after four decades remained barbaric memories. People remember that turbulent period of trepidations witnessed during its imposition that became an undying indent on her reputation.

His years in Zambia as India’s High Commissioner to African country were the period while Morarji Desai sworn in as Prime Minister on March 24, 1977 to continue until July 28, 1979. He proclaims that Desai hardly knew anything about Africa, South Africa, Southern Rhodesia and Namibia. African leaders looked at India with great esteem and sense of respect for Mahatma Gandhi, Jawaharlal Nehru and Indira Gandhi but Desai failed to retain that.

Indira Gandhi became Prime Minister on 24 January 1980 once again. K. Natwar Singh was made High Commissioner to Pakistan while Indo-Pak relations had pragmatically messed up. Islamabad was difficult posting for Indian diplomats as if living in a fish bowl, he observed. Interestingly though Pakistani diplomats in New Delhi enjoyed it because they didn’t feel that isolation like their counterparts in Islamabad.

K. Natwar Singh stayed in Warsaw, London and Lusaka before joining Islamabad. Besides being High Commissioners to many nations his roles at home as Chief Coordinator of the CHOGM-1983 to run summit to bring forty-five Heads of State, including Queen Elizabeth, to New Delhi was momentous yet challenging task. Successfully organizing two huge back-to-back summits in 1983 earned for him national profile—unusual achievement of a diplomat.

This autobiography digresses to explain rest historic blunders—Indira Gandhi’s steps to flush out Khalistani terrorists from the holy shrine of Sikhs—Golden Temple in Amritsar on 6 June 1984. It proved historic error India failed to resist. Its outrage was fierce amongst Sikhs. The then President Giani Zail Singh was put in an awkward situation due to his identity of a Sikh being forced to consider army action to desecrate his own community’s holy place. Indira Gandhi’s assassination on 31 October 1984 was its adverse aftereffect.

While Indira Gandhi was assassinated she had already become globally respected outstanding leader and statesman of her period. Fidel Castro, Margret Thatcher, J.R Jayewardene, Zia-ul Haq and Kenneth Kaunda and other Heads of State & Government attended her funeral including Deputy Prime Minister of USSR, Prime Minister of Iran, President of Syria and the American Vice President amongst others.

India’s political scene changed dramatically after Indira Gandhi’s death. Congress Party won with unexpected majority in December 1984 Lok Sabha elections. Results were beyond the imagination of even optimistic Congressmen by winning 413 out of 543 seats as outstanding achievement. Rajiv Gandhi achieved political stand which his grandfather or mother couldn’t.
K. Natwar Singh describes the visionary steps of Rajiv Gandhi in Indo-Soviet relations context and mentions an event in November 1986 SAARC Summit in Bangalore.

Rajiv Gandhi and then Sri Lankan president J.R Jayewardene were most sought after leaders there. Explaining episodes of Rajiv Gandhi’s mishandling Sri Lankan conflict of LTTE for jigsaw with Lankan authorities to mess with rebel forces that finally cost in the form of his assassination on May 21, 1991 at Sriperumbudur in Tamil Nadu at an age of 46, he candidly denounces India’s mishandling of Sri Lankan ethnic issues since beginning.

Besides counting major and minor achievements as diplomat especially breakthroughs in the Sino-Indian relations by making it possible for him to remain part of Rajiv Gandhi entourage on December 18, 1988 to China, he encores how the Rajiv Gandhi failed on many occasions. He is vocal to voice such failures in handling Sri Lankan conflict; Shah Bano case; Bofors Defense deal; Babri Masjid-Ram Janmabhoomi issue and failures in governance front. Singh was bound to face the ire from Congress Party due to his verboseness.

K. Natwar Singh had begun to speak the language of a rebel even before this autobiography arrived. Congress Party could not bear such unfathomable revolt from a person having been groomed into an acclaimed politician. Praises of Rajiv Gandhi in this book about latter being natural, charming but least pompous personality with great sense of humor didn’t counter the damages already made. 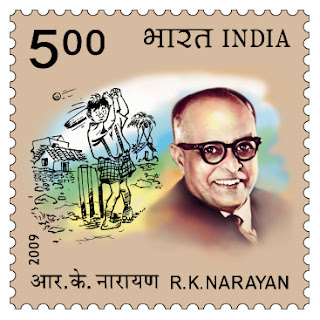 This autobiography cursorily brings the details of Rajiv Gandhi and Sonia Gandhi’s marriage to latter’s entry into politics. His ornate explanation of phases of Sonia Gandhi’s life—a period of marital bliss to wife of a Prime Minister; seclusion period from 1991 to 1998 post husband’s assassination and emergence of an active politician beginning 14 March 1998 to formal takeover of the reins of Congress Party as President are vociferous descriptions.

This book digresses to pronounce the facts related to his life that merit as confessions. His arrogance to distancing from Congress Party in the wake of Volcker Conspiracy brought bad omen for him. He was Minister of External Affairs from 22 May 2004 – 6 December 2005. On February 26, 2008, he was forced to resign from Congress Party and relinquish his Rajya Sabha membership.

Octogenarian K. Natwar Singh propped towards the current ruling party Bharatiya Janata Party (BJP) after his expulsion from Congress Party. He confesses that although his son Jagat Singh is a BJP Member of Legislative Assembly from Rajasthan he doesn’t seek any favor.

This autobiography concludes through developing an impression in readers’ minds to peep into the life of this autobiographer—from successes to upheavals, arrogance and doom. They put him into seclusion without power, political antithesis and sustenance.
This review article was first published in Mosaic Ceylon Today on February 05, 2017.
http://www.ceylontoday.lk/print20170101CT20170331.php?id=14575
Posted by Unknown at 11:50 PM